On Friday, Choir took part in the South Gloucestershire carol concert at Clifton Cathedral. They have been rehearsing hard all term to learn lots of different traditional carols including one in French. We got on our coach straight after lunch and travelled to the cathedral.  We looked very smart in our new t shirts thanks to the Friends. We had a fun taking part, we sung our hearts out and learnt more about the Christmas story. The nativity play was acted out in front of us with a real baby and donkey to add excitement to the day. We had a great time and sang beautifully.

In November, Year 6 pupils performed Shakespeare’s A Midsummer Night’s Dream at the Tobacco Factory as part of the Shakespeare Schools Festival. After their outstanding performance, six pupils were delighted to find out that they had been chosen (out of 1200 schools nationwide) to perform a scene from the play at 11 Downing Street.

Eleanor, Bailey, Kaitlyn, Morgan, Cerys and Bethany were the six pupils who took part in the performance. They performed for important people including MPs, Lords, company directors and the guest of honour Nick Hytner (Director of London’s National Theatre).

The pupils recount their day:

“We arrived at number 11 (the house of the Prime minister) and began rehearsing with four other talented schools. We were the only primary school so it was a little bit scary. In the early evening, we had time to get to know the pupils from the other schools as we ate dinner in a grand room. Before we knew it, the big moment had arrived. We performed two scenes from our play and were lucky enough to open and close the evening. The night was a great success and we received a lot of positive comments and clapping. We felt extremely proud of ourselves but also a bit disappointed it was all over.”

“This great experience has been an inspirational wonder and has made us more confident in class.“ said Bailey.

Written by Eleanor, Bethany and Cerys. 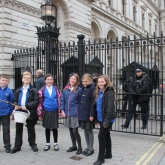 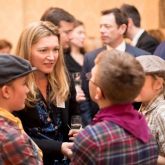 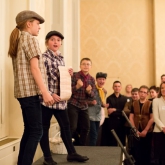 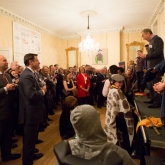 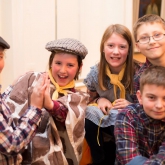